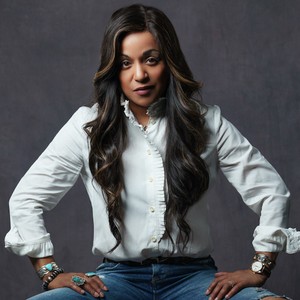 After over a year-long pandemic shutdown, Hopewell Theater is reopening its doors on Friday, September 10 at 8:00 PM – the theater’s four-year anniversary – with a grand reopening show by Hopewell musician Danielia Cotton and artists Matt Beck and Aaron Comess.

The event begins with a pre-show party at 6:30 PM, followed by an 8:00 PM celebration concert. All attending patrons will receive a free gift, courtesy of the artist and HT. Light refreshments will be available for purchase at concessions.

With a voice instantly recognizable as hers and hers alone, Danielia Cotton emerges again with a powerful soulful/rock sound and uncompromising artistry. Having been compared to rock counterparts both male (Lenny Kravitz, The Black Crowes) and female (Janis Joplin, Tina Turner, Bonnie Raitt) she dares to borrow from the greats to fight in that arena and manages to come out with a truly original sound.

Danielia Cotton came from the small town of Hopewell, New Jersey with few faces of color like her own. Although Hopewell is now a fairly racially diverse area, it was her angst-ridden youth that helped her discover rock’n roll music, which turned out to be her perfect soundtrack. She is music legacy – she grew up watching her mother and aunts, who were professional vocalists perform until she herself became inspired and brave enough to take the leap and perform her own self-penned songs.

Cotton took no short cuts, as her single mother stressed education and supported her attending Bennington College. She was one of the first of three generations in her family to attend college. After graduating she eventually found herself relocating to New York City, where she began her professional musical journey. After being discovered and basically having a label created to launch her, her city connections led her to producer Kevin Salem (Rachael Yamagata, Chocolate Genius etc.) and a powerful first album that launched her career, “Small White Town”. Shortly prior to her release she was selected as Artist to Watch by WXPN out of Philadelphia.

All of Cotton’s original work has been influenced and pulled from her life. She makes a habit of choosing the events and experiences that affected her, that she is able to emotional recall safely as her powerful performances, as she puts in her own words, “are a recreation of those life defining moments”.

Cotton recently released during the COVID shutdown the EP “A Different War”, in which she offers her personal experience of traversing through the intensity of current social issues, racism, greed and the tempestuous waters of love and relationships. As always, her album represents an eclectic musical range, with Cotton being the element that threads it all together. Cotton embodies true artistry untainted by compromise which explains her somewhat long journey to attain serious recognition. Now she has created a new album “Good Day”, to be released sometime in September of 2021. Once again, she will go from soul to arena like rock to a beautiful moaning blues ballad. She has been long fighting for a seat at the coveted music round table but refuses to sacrifice her musical values or sound. She hopes to succeed but says, “If one fan is changed you’ve succeeded. Our definition of success constantly changes as we evolve, but hey, like The Temptations sing, get ready cause here I come”.