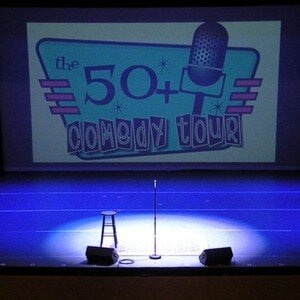 Paul Anthony is the official host of the 50+ Comedy Tour. He’s performed at top venues around the country, and is a proud member of AARP. Paul Anthony performs regularly at New York venues as well as at annual events like the Long Island Comedy Festival and Berkshire Comedy Festival.

A real “character”, Rob Falcone is one of New York City’s favorite comedians. Along with his appearances on USA Channel’s “Up all Night”, NBC’s “America’s Talking”, and Comedy Central, Rob’s million-dollar face can be seen in numerous national commercials, television shows, and films.

Robin Fox brings us into the world of a stay-at-home mom and her observations of family, marriage, romance, suburban life and so much more. Funny from the very start, this New Jersey Mom made it to the semi-finals of the Bud Lights Ladies of Laughter her first year doing stand-up. She went on to make it into the finals of the World Comedy Laugh off 3 years in a row at Carolines and Stand Up NY!


Day of Show Ticket Price: $35 plus taxes and fees