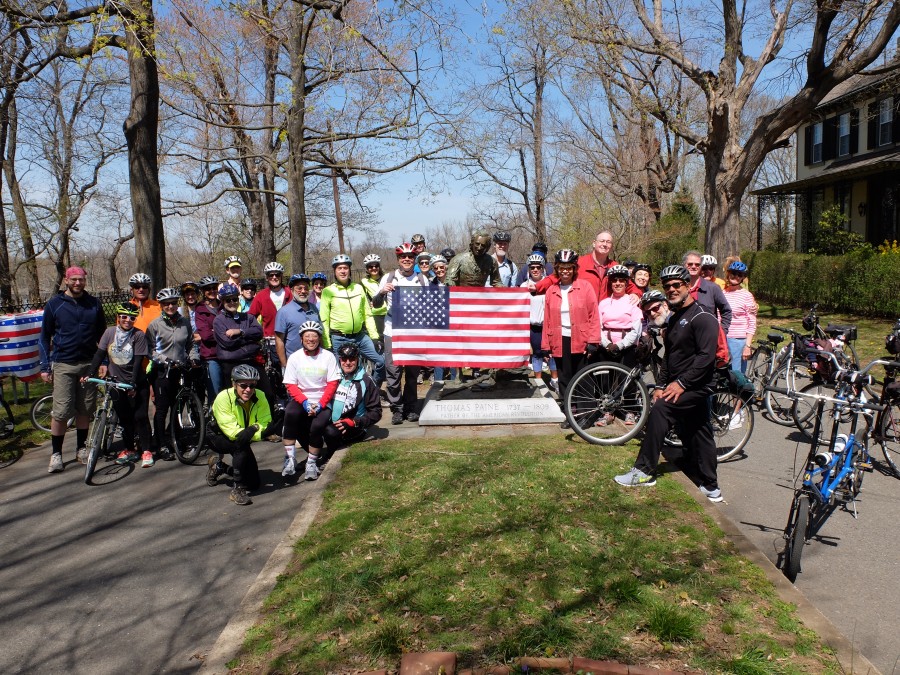 D&R Greenway Land Trust Vice-President Jay Watson led a group of about 45 cyclists on a bike ride from Trenton’s Battle Monument to the Thomas Paine Statue in Bordentown City April 16, helping to bridge the gaps in the Greater Philadelphia/Burlington/Mercer Circuit Trails. When complete the Circuit Trails will include 750 miles of multi-use paths for cyclists, walkers, runners, commuters and families for recreation and active transportation.

“Thanks to the generous support from the William Penn Foundation, D&R Greenway is working on bridging the gap between Bordentown City and the D&R Canal State Park path at the Battle Monument in Trenton. This is the northern most effort of the Circuit Trails, and we want to show how we’re all connected,” says Watson. “From Bordentown, once you arrive at the Battle Monument you’ll be able to go along the towpath to Frenchtown or New Brunswick, to the Princeton Battlefield or Washington Crossing State Park. And along the way you may see nesting bald eagles, among other wildlife.”

Cyclists on the April 16 tour, which included Mercer County Freeholder Andrew Koontz, League of American Bicyclists Board Chair Karen Jenkins, Wills Kinsley President of Trenton Cycling Revolution and East Amwell Township Mayor David Wong-Iverson, learned about the hidden heritage of the Crossroads of the American Revolution. Historian Sally Lane spoke from the steps of the Trenton Battle Monument, which commemorates the Battle of Trenton, a pivotal victory for the Continental forces during the American Revolution. Its fluted Doric column was designed by John H. Duncan, architect of Grant’s Tomb. A bronze 13-foot-tall statue of Gen. George Washington crowns the 150-feet Beaux Arts edifice, while two bronze figures of Continental soldiers guard the entrance.

On the base of the pedestal are two bronze relief panels by Thomas Eakins depicting “The Continental Army Crossing the Delaware River” and “The Opening of the Battle.” An original Otis elevator that can take viewers to the top is under repair, and Lane estimates that viewers will be able to ride it once again by the end of the year.

Cyclists saddled up to continue to South Warren Street on a bike lane, crossing Route 29 to get to Waterfront Walkway and South River Walk Park with magnificent views of the Delaware River, continuing on a newly restored section of the Delaware & Raritan Canal towpath, where D&R Canal State Park Naturalist Stephanie Fox met up with the group and pointed out the eagles nesting, proof that the site is rich for wildlife.

D&R Greenway also seeks to connect the County’s Tulpehaking Nature Center, Abbott Marshlands and the Lawrence Hopewell Trail to the Circuit network. Dr. Mary Leck, Rider University Professor of Biology Emeritus, talked about the rich ecological history of Abbott Marshlands, the northernmost tidal freshwater wetland on the Delaware with 3,000 acres of preserved open space. Within the Marshlands boundaries are the Abbott Farm National Historic Landmark, which recognizes  Native American life in and around the Marsh for 13,000 years, and the contributions of archaeologists such as Charles Conrad Abbott and Dorothy Cross.

“We are very proud of the work we are doing to ‘Connect the Circuit’ trails in and through Trenton” said Linda Mead, President & CEO of D&R Greenway Land Trust.  “Our ride was one of many other events held this past weekend to demonstrate the trail links that will bring all of our communities together”.

Joseph Bonaparte, brother of Napoleon, lived at Point Breeze near Bordentown for 22 years, and at the Thomas Paine statue in Bordentown, historian Mike Skelly spoke about the life of one of the nation’s founding fathers. Skelly pointed out that if it hadn’t been for Paine, he wouldn’t be speaking from Bordentown City, U.S.A., but from a place called West Jersey, England. Paine, who failed at several endeavors in England and nearly died of typhoid before coming to Philadelphia at the suggestion of Benjamin Franklin, went on to write the first bestseller in the U.S. “Common Sense,” his pamphlet of letters to the editor of various newspapers, argued for independence from Great Britain. Paine settled in Bordentown because of an invitation from the father of a Quaker with whom he’d fallen in love.