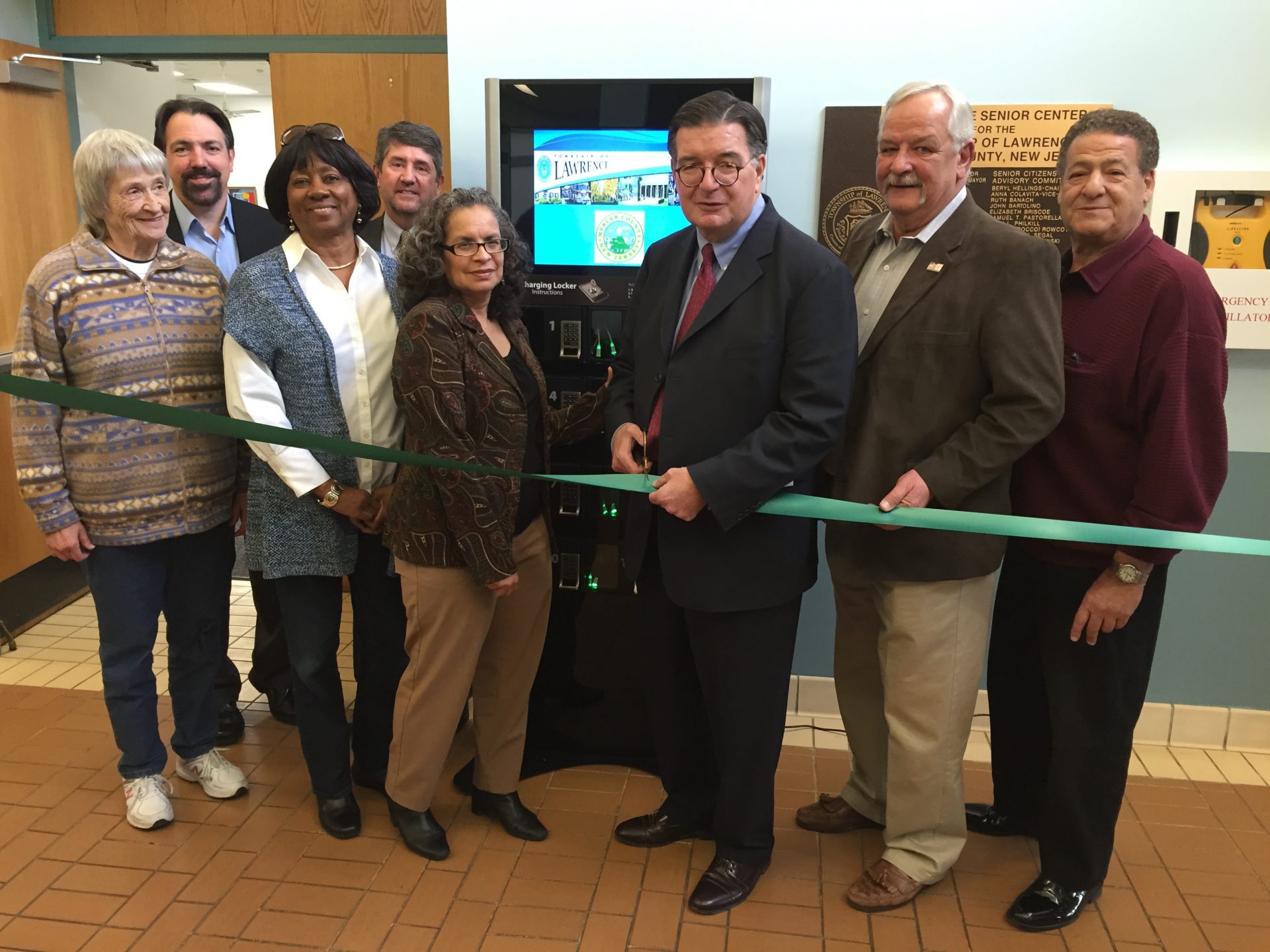 This month, Mercer County Executive Brian M. Hughes unveiled the first of 11 phone-charging stations the county has purchased with Homeland Security grant funds that will enable residents to charge their cell phones at designated public sites during prolonged power outages.

A ceremonial ribbon was cut to mark the activation of the floor-standing cellular phone charging locker at the Lawrence Senior Center on Darrah Lane East, which will be available for use by the public during disasters, as well as for normal daily use.

“We realized after Superstorm Sandy struck that one of our greatest needs was for more ‘resource centers’ where people could charge their cell phones, power up medical equipment and get information,” Mr. Hughes said. “These charging stations will enhance our towns’ capabilities of establishing resource centers, and will be a real benefit to our residents in the event of another major storm or other emergency.”

Each charging station contains 12 locking ports in which residents can securely charge their cell phones.

The other charging stations will be allocated in the coming weeks based on recommendations by the Mercer County Mass Care Committee, which was established following Superstorm Sandy to help the county and its communities be better prepared for future emergencies.

Mr. Hughes said the concept is to place the charging stations at locations that will have generator power so those sites can serve as community resource centers during an emergency. Locations will include facilities that have received the county allocation of Superstorm Sandy generator grants and other sites that local officials have identified as potential resource centers.

Municipal locations, which could be modified by the municipality in the future based on changing needs or facilities, include East Windsor Senior Center, Ewing Senior Center, Hamilton Senior Center, Hopewell Township Municipal Building, Pennington First Aid Squad, Princeton Senior Center and West Windsor Senior Center. County locations include the Community College gymnasium, the Indoor Tennis Center and Trenton-Mercer Airport. This is the initial deployment of charging stations, county officials said, and as resource center plans are finalized with other municipalities, more equipment will be obtained using the county’s annual Homeland Security grant.

In July, the Board of Chosen Freeholders approved a contract purchase from American Hotel Register Co. for the 11 charging stations at a projected cost of $59,994 that is being funded from Mercer County’s 2014 Homeland Security grant.