There is something about a quaint cafe one just happens upon around the odd corner in some small provincial town or village. Whether it’s Ingrid Bergman looking forlorn in Rick’s Cafe or lovers cooing over cafe con leche and pork tacos at El Dandy in Havana, there is a mystique about cafes. And, somewhere inside of us, our inner 40’s movie icon is waiting to speak a swoon-worthy line over a buttery pastry with an incredible musical score swelling in the background. We just got the perfect place to do that in Pennington.

Enter, Eclair Cafe, stage right. And right on time. Finally. For months, Pennington residents have been flirted and teased with the promise of a mysterious cafe opening sometime in the future. Little by little, signs of work done in secret appeared. Lights, paint, lettering on windows, clearly someone was toiling away but then sheer paper obscured the view, giving us only the briefest of peeks like a naughty Can-Can dancer in some anticipated burlesque revue.

“I know, it took a long time to open but we hope it is worth the wait,” stated Marie-Mathilde Laplanche co-owner and head chef.

Chefs, owners, and partners, Laplanche and her husband, Ron Suzuki, opened the doors of Eclair Cafe on March 27. The relief was evident in her eyes at finally opening the cafe, but so was the excitement about what this small slice of France could be in Pennington. A native of Brittany, her love of baking was inspired by her grandfather who lived in Bourgogne (Burgundy).

“He was a confectioner and made wonderful pastries and desserts with fruits he grew in his garden. He also made chocolate, candies, and ice cream,” she continued, as a joyful lilt rose and fell at these reminiscences.

Channeling her grandfather, Marie-Mathilde (she insists that both names are used, so remember that!) Laplanche has brought the flavors and tastes of those childhood memories to her new hometown of Pennington.

“Of course, I love French food and cooking,” Laplanche relayed, with a charming French accent, “but I love so many things, different kinds and tastes and foods, It is hard to pick just one. My husband is always coming up with something new to taste.”

Pennington’s newest addition is a nod to a particular Parisian aesthetic: sparse but not empty, with a clean, welcoming feel, white marble-topped tables with white chairs and the fragrance of coffee and butter lightly decorating the air. And the cream-colored walls are dressed with a few reminders of France, along with a large chalkboard displaying the Eclair Cafe offerings.

“Right now, we are serving breakfast and a few items, such as our pastries and, of course, eclairs, but we will be serving lunch starting Tuesday, April 2,” said Chef Laplanche. 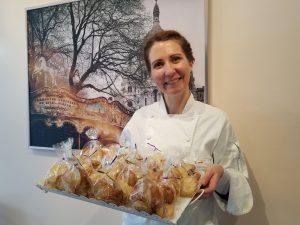 Breakfast has a decidedly French emphasis with options for classic pastries like scones, croissants with fruit, pain au chocolat, and yogurt parfait, but they also know where they are and have adjusted accordingly. We, Americans, love our breakfast sandwiches, so seeing brioche with avocado, egg, and bacon on the menu should satisfy those who don’t want to break with tradition, just yet. Did I mention they make their own brioche for the sandwiches? They do. They will have quiche every day and salads, as well. The plat du jour will change daily depending on “season and inspiration,” Laplanche informed.

Things seemed be starting off quite nicely with a steady flow of residents coming in to satisfy their curiosity.

My visit was late in the day and the once abundantly-filled display case was quickly disappearing. When I visited at one o’clock, a few vestiges of breakfast remained— some mini croissants, a spinach-feta puff, a few almondines— it was the tart display that looked ravaged: one beautifully appointed pavlova was left along with a few tarts. I bought some of the last few treats (none of which was an eclair because they were the first to go): a lemon tart crowned with a perfectly toasted meringue, along with a mini version of the same, and a chocolate hazelnut tart, topped with a single raspberry. I could only imagine what filled the case earlier that morning but the young woman behind the counter informed me that, when they opened, it had been quite full and all of it went quickly. The sheer variety of their specialty eclairs is clearly a draw. With flavors like strawberry, raspberry, and apple, I am sure we can expect some interesting and innovative from these two creative chefs, especially Chef Suzuki.

“We have one location in Plainsboro but really wanted to have something here in the town that we live. We just love it here and we love the people here,” stated Chef Ron Suzuki, a former Lawrenceville resident.

Although right now he is dressed in a crisp chef’s coat embroidered with the logo “ICC”, indicating that he is a graduate of the International Culinary Center, his other job calls for a stethoscope to be dangling around his neck. Some residents may already be familiar with Dr. Suzuki when he practiced medicine here in Pennington with Dr. Piepszak prior to his retirement. Suzuki has since taken over that practice. Clearly Laplanche and Suzuki are a couple with passion, vision, and drive.

As Chef Suzuki reiterated, “Food is central to so many things — family, friends, so much. We want to create a place where people can come in and have a pastry or a meal and a latte or espresso and feel both at home and like they are in their favorite little cafe somewhere in Paris.”

With an emphasis on clean, fresh, and local, chefs Laplanche and Suzuki are committed to using locally-sourced ingredients as well as utilizing other local suppliers and artisans. In their small refrigerator, you can find locally produced cold press juice by Marchese Family Farm, which is grown, pressed and bottled in Hopewell.

“Ingredients are important to us. My grandfather grew almost everything he used in his food. That was the reason his ice cream and pastries were so good” stated Chef Laplanche.

She clearly had her grandfather in mind when I tasted that lemon tart. The crust was so delicate, flaky, and buttery, with the right amount of snap to it. The lemon curd custard had that zing that reminded you of the freshness we expect from a lemon, not the sting of an artificial flavoring that is trying too hard. We’ve all had the rubbery, tasteless tart that is lost on our taste buds but makes its way quickly to our hips. This was not one of those. If something is going to live on my hips for awhile, I’d like it to taste really good.

Looking around while I readied myself to leave, I could see that the cafe had turned over a few times with different people at the counter and at the tables. Alyce Murray and Jenn DiDonato were headed to the counter to pay their bill, when I inquired about their meal. Alyce enthusiastically commented that the tomatoes on her micro green salad with citrus dressing “were like candy.” Jenn had the arugula, tomato, and dijon quiche which she said was fantastic. Looks like Eclair Cafe is off to a good start.

Those of us who live in Pennington know the revolving door of restaurants that have inhabited this particular address. Sadly, most did not stick around too long. Chefs Laplanche and Suzuki are familiar with this history as well and are committed to carving a space for themselves in the Pennington landscape.

“We want to concentrate on the quality and presentation as opposed to having an  extensive menu,” Chef Suzuki shared. “We want to create simple but incredibly delicious food and, in the end, we want it to make people happy.” Judging from what I observed, it looks like they’re halfway there. Vive La France!

Eclair Cafe is located at 20 North Main Street Pennington, NJ 08534. They are open from 7am- 5:30 pm during the week with the kitchen closing at 2pm, and 8am-2:30pm Saturday and Sunday. These are subject to change as they find their stride. They are establishing their website and it should be up soon with all their info. Until then, do a drive by and go get an eclair or a tart or breakfast.  Everybody’s doing it!! Yum it up. Tell all your friends.

As always, please support our local restaurants, businesses and service providers. We can’t make it without you and don’t forget to subscribe to MercerMe!