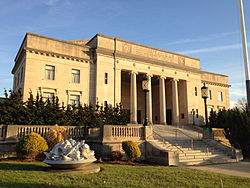 The Capital Philharmonic announces its 4th season of concerts, all of which will take place at Trenton’s War Memorial. There are 4 events featuring an impressive array of guest artists and an eclectic mix of repertoire. All programs will be conducted by CPNJ Music Director, Daniel Spalding.

The season begins October 22 at 7:30 with a program entitled “The Dream of America”. Celebrating the diversity of America, the concert opens with Aaron Copland’s “Fanfare for the Common Man”, followed by Antonin Dvorak’s famous “New World Symphony”, a work influenced by Dvorak’s exposure to Negro spirituals. The centerpiece of the program is “Ellis Island: The Dream of America”, by Peter Boyer. This multi-media production includes actors from Trenton’s Passage Theater and projected images from the Ellis Island archives which accompany a powerful musical score.

The Capital Philharmonic continues one of this area’s most revered traditions with its annual New Year’s Eve concert on December 31 at 8 PM. Some of this year’s light classics will include Light Cavalry Overture, Leonard Bernstein’s “Three Dances from Fancy Free” and Gershwin’s iconic Rhapsody in Blue. Guest soloist is world renowned pianist Leon Bates.

On Saturday, March 11 at 7:30, the CPNJ Chamber Orchestra will perform in the elegant War Memorial Ballroom and will feature exciting Cuban violinist Ilmar Gavilán. Also on the program is the ever popular Tchaikovsky “Serenade for Strings.”

On Saturday, April 22 at 7:30, the Capital Philharmonic will present “IN THE MOOD” a celebration of the music of the 1930s & 40s – the Big Band era. It was the last time that all Americans were listening and dancing to the same kind of music. The concert will feature the sensational 13 piece “String of Pearls Big Band” along with the full CPNJ Orchestra and singers and dancers, all in period costumes. These great melodies and lyrics that are still with us today and are presented in a musical revue that is jazzy, sentimental, rhythmic, nostalgic and patriotic – all happening at the same time. With music arrangements, costumes and choreography IN THE MOOD is as authentic as it gets.