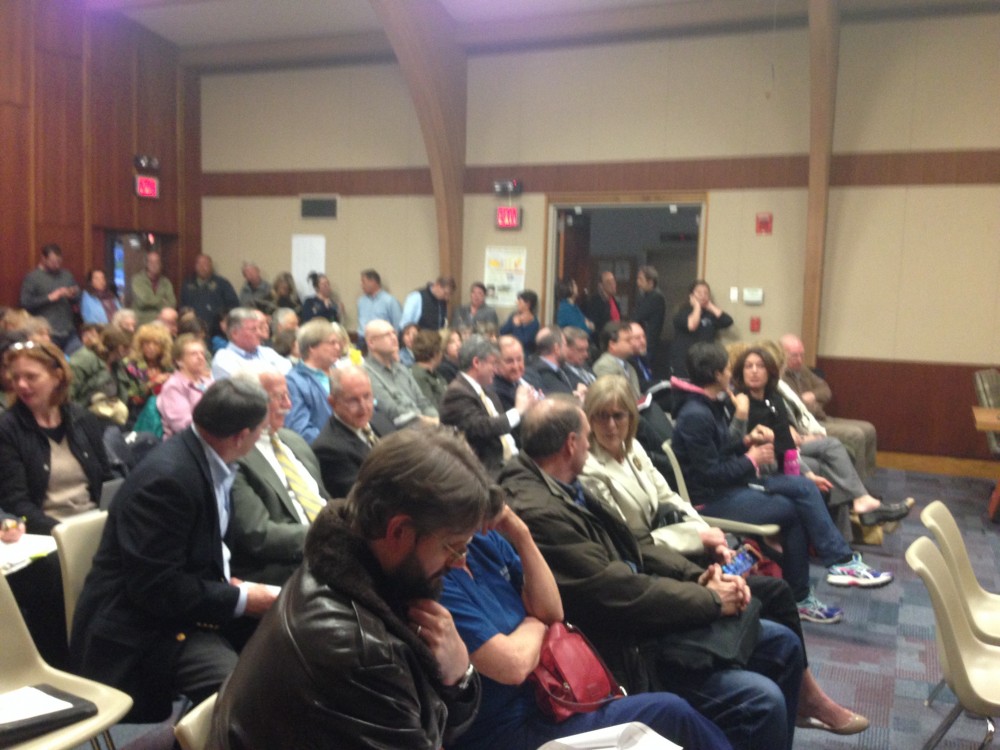 At a completely packed Hopewell Township Zoning Board of Adjustment special meeting last night, residents attended in opposition to a proposed project to replace the current Al’s Sunoco, on Route 31N in Pennington/Hopewell Township, with a newly constructed 24-hour CVS.

The applicant, CVS Pharmacy, is asking the Hopewell Township Zoning Board of Adjustment for a use variance and site plan approval for new-construction free-standing 14,600-square foot 24-hour CVS pharmacy with a drive-thru on a site that currently is home to 3491-square foot gas station. The property is zoned “residential” and the applicant is requesting a use variance to permit this commercial use.

“We are here to listen. We are not here to engage in anything other than a dialogue with the board and with the public,” said Henry Kent-Smith the attorney for CVS. “We believe this process will result in a plan that will be beneficial to this Township.” 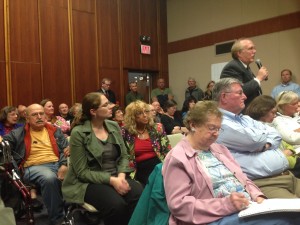 CVS Pharmacy representative, Joe Stanley, asserted in his testimony this RT31N location has been well-studied with the guiding principles of: 1) convenience; 2) access; 3) visibility. CVS also believes that it will particularly benefit those in Hopewell Valley who have visited the hospital late at night and are unable to fill a prescription elsewhere. However, CVS also conceded that they would be willing to agree to limitations regarding the store hours.

“The Pennington market is attractive… and the site has all the attributes that I just explained but, in particular, it is a location that is not served by CVS right now. The closest locations are in Lawrence and Ewing,” said Stanley. CVS assessed a variety of other properties along the RT 31 corridor, but determined that this site was optimal for their business.

To evaluate impact on abutting residential properties, Board Chairman Bill Connolly inquired about truck noise and associated delivery disturbances. “Surely you’ve seen the plans and the loading is in the back and abuts residential,” said Connolly. The applicant indicated that the trucks would be unloaded with a pallet jack and truck lift, both of which make some noise. Stanley further explained that trucks take 30 to 40 minutes once per week to offload and, on a daily basis, vendors will make deliveries by smaller trucks.

With regard to the drive-thru, Stanely testified that a typical drive-thru pharmacy transaction takes approximately 60-90 seconds and that there is no peak hour for prescriptions therefore no resulting traffic congestion. “The most I have ever seen is one car going in and the next car just cuing up,” said Stanely.

However, when pressed on this figure by one member of the public, local advocacy attorney Katherine Dresdner, Stanley said that he was not aware of the amount of time is required for pharmacists to explain necessary information to individuals picking up medications, however he stated that he would get this information by the next hearing.

When given the opportunity to present questions to the witness, members of the public in attendance expressed concern about delivery truck traffic and noise, increased commercial traffic and how it will effect the quality of life in Pennington and Hopewell, declining property values and safety risks to pedestrians, in particular children walking to and from school.

Many members of the public inquired whether the community could support another pharmacy. Chairman Connolly explained that whether CVS is making a good business decision is not something the board can consider. “We care about the impact on the community,” said Connolly. “It isn’t whether it is a business mistake.”

CVS intends to remove the existing mature vegetation surrounding the Sunoco, according to Grysko, but plans to replace the trees or refund the Township, based on the Township’s Shade Tree requirements. It will also install plantings, shade trees, shrubs and perennials. Many members of the public expressed concern that removing the mature trees would increase the visibility from abutting residential homes.

Jeffery Baron, an attorney representing approximately 15-20 families in the Pennington/Hopewell area opposing the project, pointed own that the current owner of the property removed trees without approval which also have to be replaced on the property. Baron also grilled the applicant’s engineer with several questions, many of which will have to be answered at a later date as the applicant was not prepared with the information.

Signage was hotly contested as the applicant is asking for a site plan waiver because the free standing signs exceed the signage limitations. “Is there a reason why you so wildly are disregarding our signage requirement?” asked Chairman Connolly. And when the applicant was instructed that it would comply with the signage requirements, the zoning board was met with considerable resistance: “Because we want people to see the signs,” explained Kent-Smith. One of the signs affixed to the building would be at 18 feet high, which is approximately the same level as the second story of a residential home.

Other issues included residential vs. commercial setbacks and what buffer sizes were required, especially since a small sliver of the property is on Pennington Borough property. The applicant was instructed to revisit the Township’s requirements to ensure that the presented plans comply with the Township’s zoning ordinance.

Infiltration of storm water was also an issue. Based on the documents, the engineer did not think he would be able to comply with storm water management without further investigation due to the presence of shale weathered rock, which is not suitable for infiltration. Grysko indicated that further testing needs to be done to determine whether this can be provided. 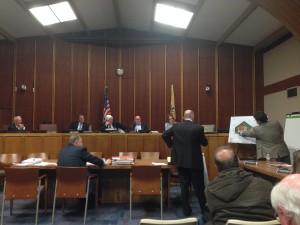 Additionally, the applicant said it had not yet provided “Ready to Serve” letters to Pennington which would alert the municipality of the potential increased sewer usage from the property development. CVS was instructed to comply with this requirement.

“The application needs to comply otherwise there is an issue to suitability,” said Connolly. “We need to evaluate non-structural before anything else but you haven’t done that. Is it because the site can’t accommodate it or you haven’t gotten to it?” Connolly asked.

Zoning board member, William Cane, agreed with Connolly and said that the applicant  should have looked at the requirements before they appeared before the board. Both Cane and Connolly were resistant to grant an adjournment for so many months but no other board member voted to deny the request.

“With all due respect, you should have done more before you came,” said Cane.

The answer from Kent-Smith on behalf of CVS: “We will need to address that and I believe we can.” And the applicant asked for an extension until the June meeting to address the application deficiencies. “I need the additional time to do the evaluation. Should I have done things right the first time? Sure. I wish I was that perfect. We have a process we need to follow and that process should be allowed to play out.”

The hearing will be continued on Wednesday June 1, 2016 at 7:30pm at the Hopewell Township Municipal Building.