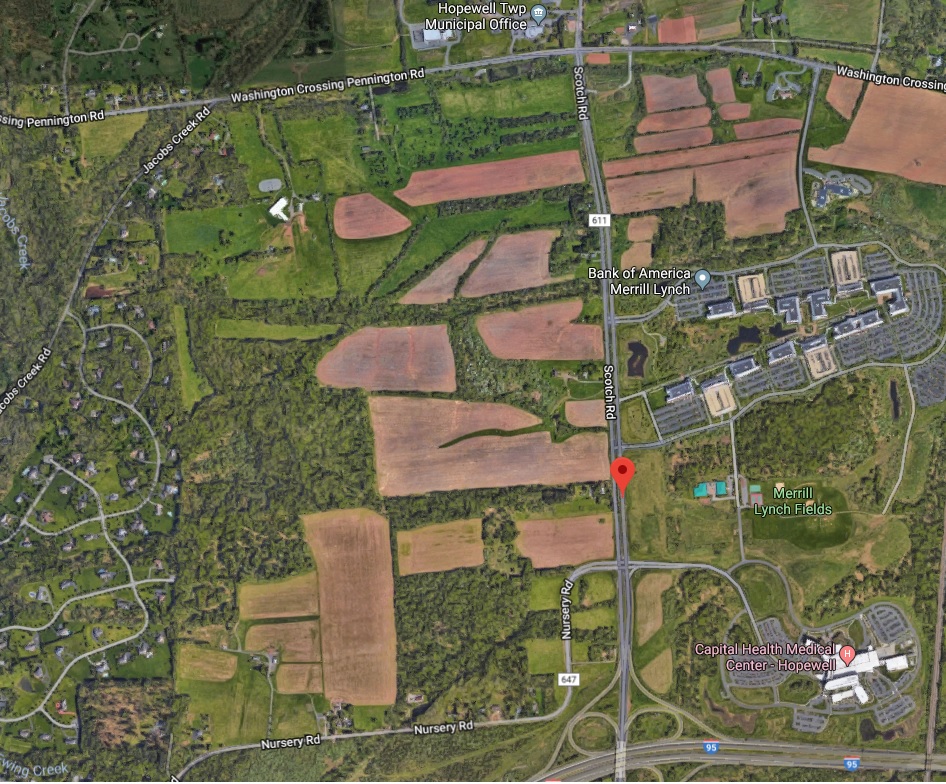 At a Township Committee special meeting held on Thursday December 7, 2017, Hopewell Township heard the first reading of an ordinance authorizing the exchange of properties owned by CF Hopewell CC&L, LLC (“CF Hopewell”) and

Hopewell Township. If approved, the ordinance will authorize the Township deeding land known as Block 93, Lots 5.01 and 5.02 (see Figure 1, marked blue) on the tax maps to CF Hopewell for use in meeting the municipality’s affordable housing obligation, in exchange for the deeds of Block 93, Lots 3.01 and 6.01 for the purpose of open space (see Figure 1, marked yellow). Additionally, the ordinance outlines CF Hopewell’s request to adjust current lot lines and the creation of additional lots to enable the land transfer. The ordinance is part of the settlement agreement in the affordable housing litigation.

“This is essentially preserving the viewshed from Washington Crossing-Pennington Road, looking toward Scotch and also preserving approximately 1000 ft to the rear of the lot, protecting the Jacob’s Creek tributary,” said Hopewell Township Mayor, Kevin Kuchinski. A second reading and public hearing will take place at the Township Committee meeting on December 19th.

The decision to amend the Plan was made after the Planning Board’s November 16th meeting when the Plan’s Housing Plan Element was approved. Previously, the Plan referenced the supplemental documents (i.e. Spending Plan) rather than contained them. The amended document is lengthier, including all components of the Housing Plan Element and Fair Share Plan.

Before Block 93, Lot 5.02 (see Figure 1, marked blue) could be considered as a parcel used to meet the Township’s affordable housing obligation, the land had to be found as “an area in need of redevelopment.” It was the only parcel of land in the Scotch Road area not to have been declared as such. To that end, the Planning Board reviewed the Preliminary Investigation Report for Designation of an Area in Need of Redevelopment Block 93, Lot 5.02 – 449 Scotch Road (Investigation Report) and found it met criteria.

Major Subdivision Application by CF Hopewell on Lots 3.01 and 6.01

The application was approved proposing changes to Block 93, Lots 3.01 and 6.01. The application was presented by the CF Hopewell Attorney to the Planning Board for the second time. Though it had previously been presented at the last meeting, due to concerns of whether the plans made it within the 10 day notice period, they were presented again. The subdivision plan (see Figure 2):