Officers arrested Righteous Laster, 19 years old from Trenton, in Pemberton Township yesterday morning without incident. Laster was charged with the crimes of robbery, carjacking, kidnapping, burglary, theft by extortion, criminal restraint, terroristic threats, liability for conduct of another, possession of a weapon for unlawful purpose, unlawful possession of a weapon, theft of movable property and credit card theft.

Laster was also charged with possession of a controlled dangerous substance for being in possession of 7 packets of heroin during his arrest. Mercer County Superior Court Judge Hon. Darlene J. Pereksta set bail at $250,000.00 cash/bond. Laster will be transported to the Mercer County Correction Center for default of bail.

Lawrence Township Police Department is still trying to identify the second suspect in this incident. With the assistance of the New Jersey State Police composite unit a composite was developed of the second suspect. Suspect two is described as a black male between the ages of 20 to 30 years old, approximately 5’8” to 5’10” with a medium build and close cut hair style. He was last seen wearing a gray t-shirt and cargo style shorts. 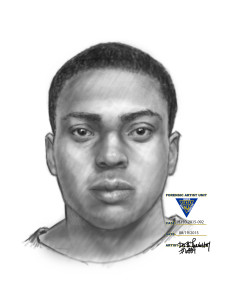 If anyone recognizes the second suspect, please contact Det. Daniel Gladney at 609- 844-7128 or dgladney@lawrencetwp.com.