I am briefly interrupting our current “Cake Quest” to reiterate something that most of us already know… Swine is Divine. In all of its fried, baked, chopped, crumbled forms, most of us indulge in the “other white meat” in one way or another.

This past May 23rd, Trenton turned the spotlight on one of its own native creations: the pork roll. The 2nd Annual Pork Roll Festival was celebrated in two location this year and enjoyed by thousands. The Pork Roll Festival was first celebrated last year at Trenton Social on South Broad Street and this year there was also a location in the Mill Hill Park.  Food trucks came from all over the state to serve up our favorite hubcap shaped rounds of love. I saw so much creativity visited on Trenton’s premier claim to fame, I wish I had more room in my stomach and on my thighs to appreciate all the imaginative delights that I saw. 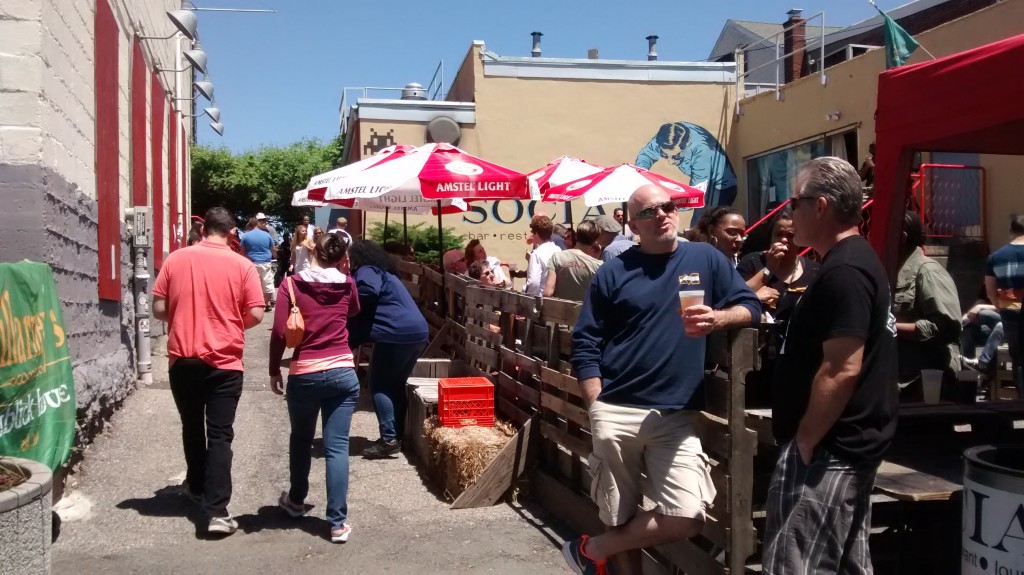 I started my day where it all began last year: at Trenton Social, accompanied by my son Josiah and real estate agent extraordinaire, Debbie Olsen of Smires & Associates.  We first had to down the traditional tried and true pork roll breakfast sandwich – pork roll, egg and cheese – although I omitted both the egg and the cheese and went straight hog.  We arrived early to beat the crowds, as I remembered how packed it was last year. In fact, they ran out of pork roll and were scrambling to get more, thus proving that the smell of pork roll is, indeed, the smell of success.  Over 4,000 people attended last year and the papers were predicting similar numbers for 2015, so I whipped past the DJ and headed for the pork promised land.

Jack Manousos and the gang from Killarney’s Publick House were frying up some deliciousness that gave me heart palpitations before they even touched a taste bud. One of the chefs at Killarney’s, Post, was at his cauldron stirripicng up a Jameson Whiskey Caramel Sauce to ladle over their own creation, the Trenton Style Funnel Cake. Brace. Your. Self.  This delight was a traditional funnel cake topped with Red Delicious apples and bits of chopped pork roll, drizzled in the aforementioned caramel sauce.  It was better than it looked, and it looked fantastic. This was indeed something you should have only once a year, to be sure, but it is well worth the wait. And I’m sure your arteries will thank you amidst the protests from your taste buds. 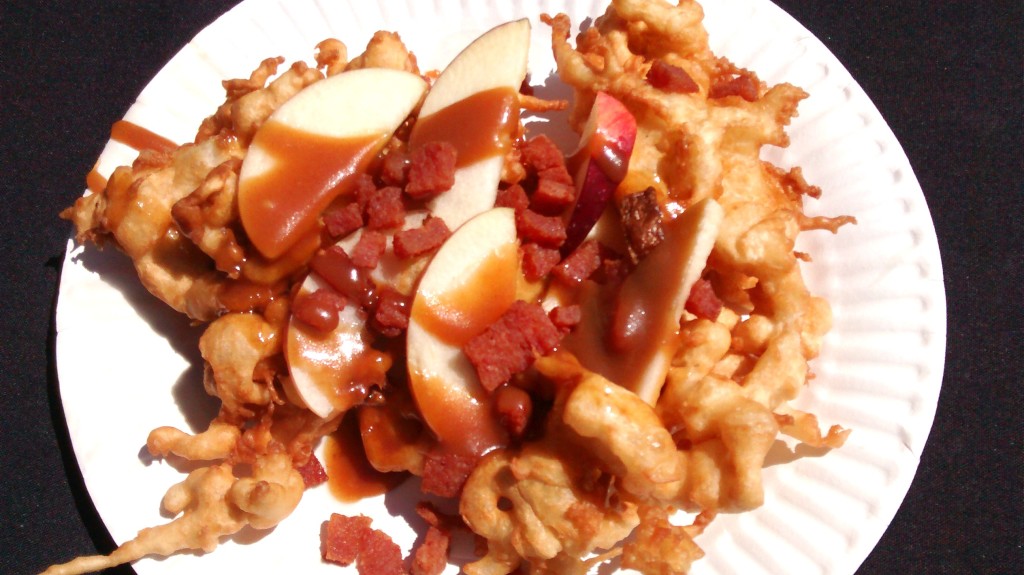 “T.C. Nelson [proprietor of the Trenton Social] is a friend of mine and we wanted to come out and support this great event.  We love pork roll and we love Trenton,” said Manousos while flipping a succession of pork roll slices on his grill.  “This event really brings a lot of people into Trenton and highlights something that has be ignored a lot,” he continued.

I made my way around the vendors, who were not as numerous at the year before (more on that later) but it was still very early.  I kept passing people holding some interesting-looking pastries and, after investigating, I came upon Uncle Dood’s Donuts from Tom’s River, New Jersey.  It turns out that they were serving up a pork roll covered donut.  A pork roll covered donut.  Pork roll covered! Now I love ingenuity and creativity but, even I, who love the swine more than I should, wouldn’t have thought this up.  It was a spice donut dipped in an opaque maple sauce then re-dipped lovingly and generously in fried, chopped pork roll and topped with a generous squirt of sriracha sauce, if you wanted.  Folks were walking away with more than three and some even had them boxed to head home with.  The flavorful spice cake was tasty enough to stand on its own and demonstrated that it wasn’t just a backdrop for the pork roll.   I didn’t wait to eat this, and I’m glad I didn’t. 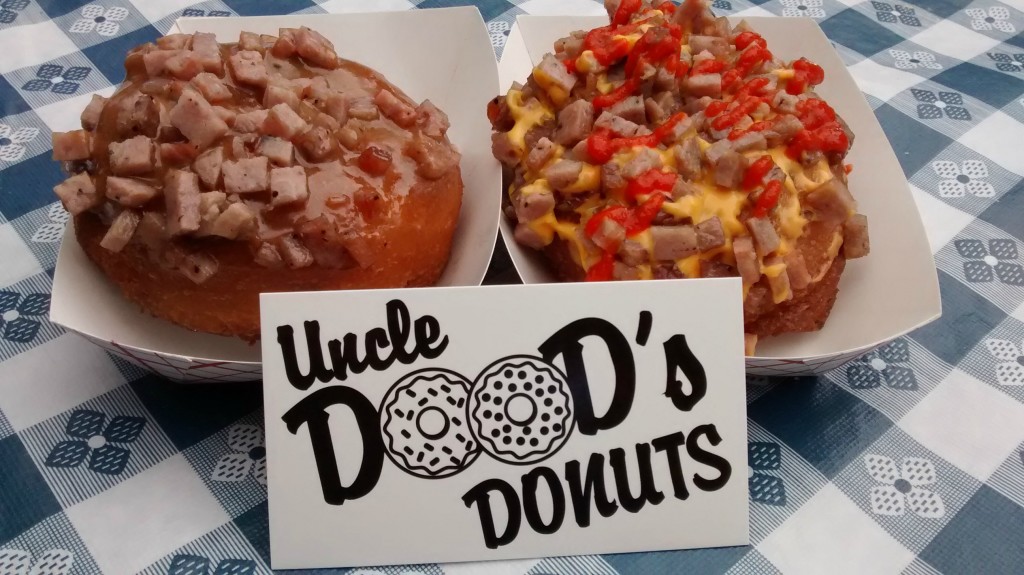 Inside the Social, the sushi chefs were busy making pork roll sushi that looked amazing.  When I asked a patron what he thought, he said it was the best thing he had eaten so far. There were a few more vendors with pork roll topped tater tots and pork roll sliders but I wanted to make my way to the Mill Hill Park to see what magic awaited me there. 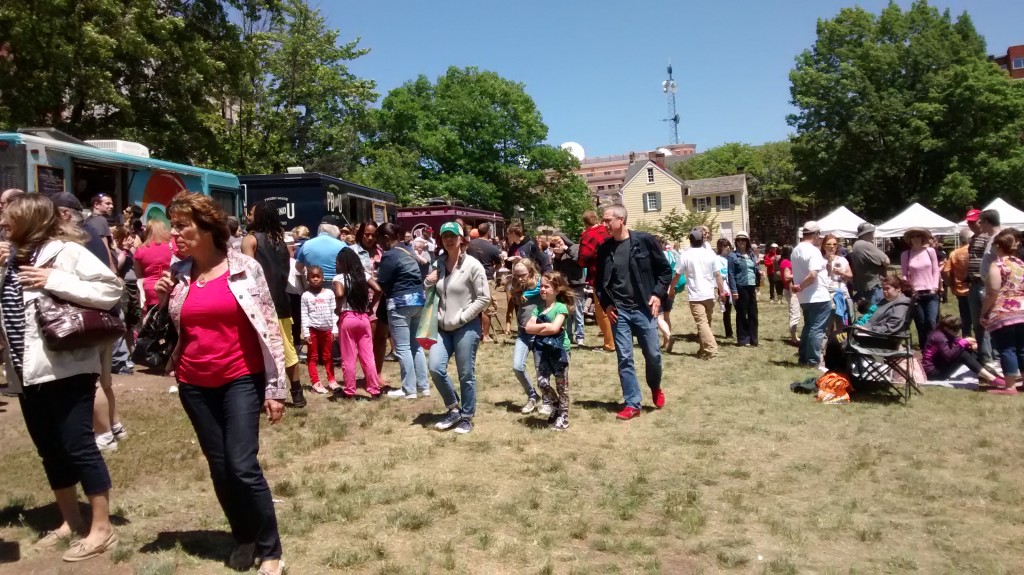 The larger space at Mill Hill Park was able to accommodate more people than Trenton Social, and the people were out in the hundreds.  With 11 food trucks – including the guys from the “PB and U” truck, the “WTF” Truck (best Po’ Boys around), and the Whole Foods Truck, to name a few – and several free-standing vendors, there were more than a few samplings of Trenton’s favorite.  The lines were long – really long – and  while you considered whether to try the pork roll sliders, pork roll tacos or pork roll kabobs, you could browse typical country fair vendors selling their wares from tee-shirts to Swarovski crystals, to cotton candy and funky hats.  I tried to stand in line for the “Eat Curds” truck, but after about 25 minutes I was a bit exhausted.  Pork roll topped cheese curds seemed really tasty to me and I watched as others exclaimed how delicious it was.  With so many tasty possibilities and so many Trentonians and others taking advantage of the offering of both venues, there is no reason why we can’t look forward to an even bigger and better event next year.  If you haven’t attended the Pork Roll Festival you are definitely missing a creative and imaginative culinary fun fest featuring a true Trenton original.  I encourage you to come out next year with an empty stomach, a full wallet, good friends and an appetite open to experience pork roll like you never have before.

Now I am sure some of you may have heard that there was some “Beef” around the Pork Roll Festival this year.  There was, hence we had two separate festivals, and you can read all the specifics as to what it was all about elsewhere.  My hope is that next year the two founders of the original festival can mend their fences, come together and give us a festival next May that is worthy of this Trenton favorite, sans the behind-the-scenes drama.

This is a fantastic event and really highlights our capital city and all the diversity therein.  I saw so many different flavors of people at both locations enjoying pork roll, showing off some of the best food and music found anywhere in this area.  That is a good thing for all of us and a really good thing for Trenton. I heard of two men, one from Germany and one from the UK, who came to Trenton solely to enjoy the Pork Roll Festival.  My hope is next year they, along with the rest of us, will have to go to only one location to indulge our deepest culinary swine fantasies. I am hoping that the powers that be do whatever needs to be done to make that happen.