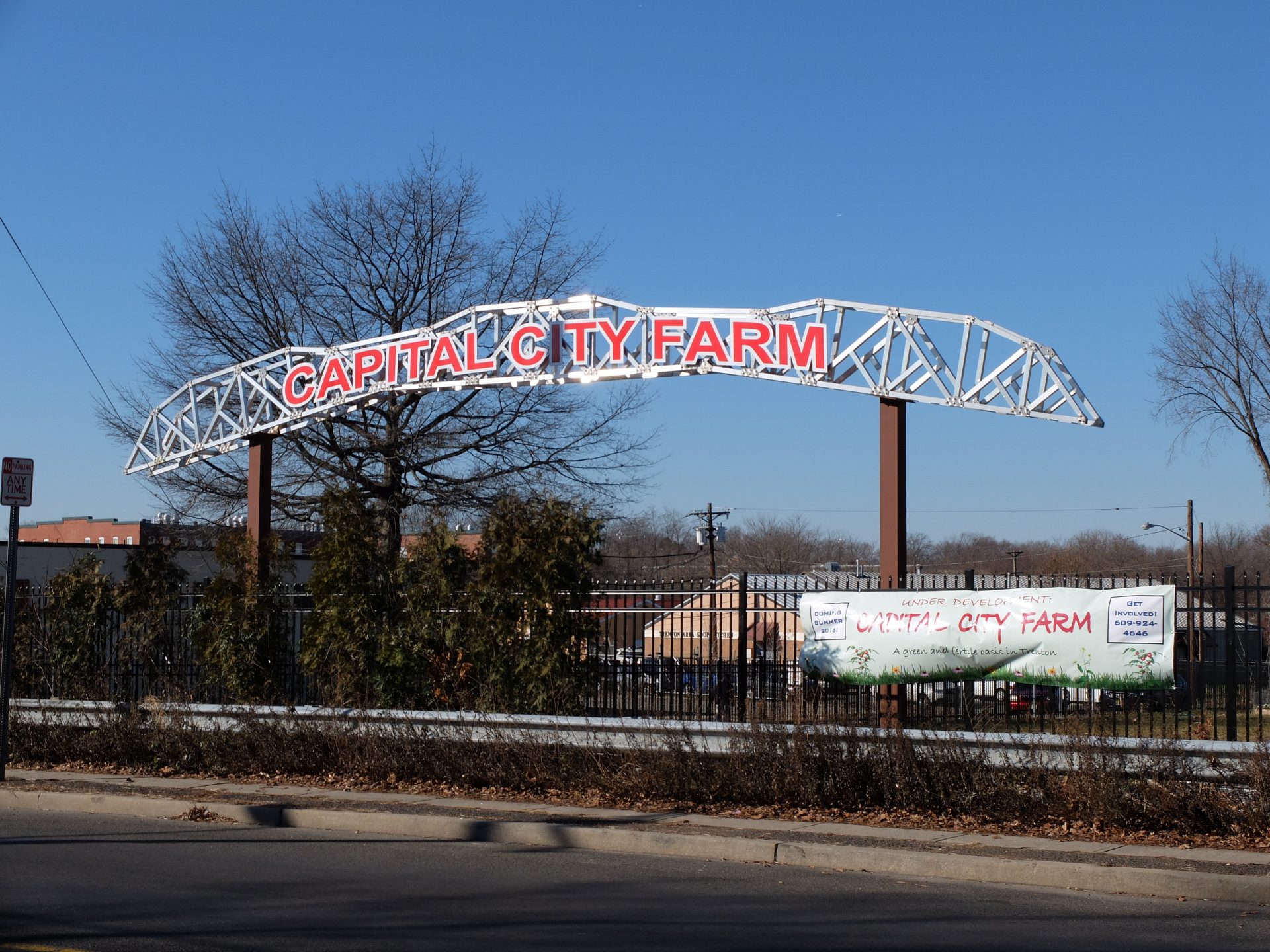 A repurposed sign with reference to the iconic “Trenton Makes” bridge — could there be a better way to welcome visitors to the Capital City Farm in Trenton?

The repurposed superstructure of the sign was fabricated by Z Signs of Trenton to replicate the Lower Trenton Bridge, emblazoned with the city’s motto: “Trenton Makes.”

“The new sign marks the ‘face’ of the new farm and, by recycling available resources, we are fulfilling our mission to be sustainable, just as this farm project does,” said Linda Mead, President & CEO of D&R Greenway, the organization leading the farm development. “The sign, in storage for a number of years, is returning to the people of Trenton, and this project strengthens our partnership with Mayor Jackson, Trenton and its citizens.”

Through a Neighborhood Revitalization Tax Credit Grant provided through the East Trenton Collaborative, Z Signs of Trenton re-lettered the sign to read “Capital City Farm” and has installed it in its new location.

“We are lucky to have the opportunity to put this iconic symbol in this innovative space,” raved D&R Greenway Vice-President Jay Watson.

“Trenton is a city with a compelling historic, architectural and cultural narrative that has influenced the American experience,” said Trenton Mayor Eric E. Jackson. “We are proud of that undeniable impact, and this repurposed sign constructed of aluminum and steel illustrates our commitment to our community and to any endeavors, such as this amazing Capital City Farm project, that we undertake together.”

Located next to the Trenton Area Soup Kitchen on Escher Street in Trenton, the land for the Capital City Farm was acquired for the project by the City of Trenton with funding from Mercer County’s Open Space Fund. The project has been guided by a collaborative composed of D&R Greenway, East Trenton Collaborative, Isles Inc, Trenton Area Soup Kitchen, Escher St SRO, Helping Arms, Rescue Mission, the Watson Institute, Designing the We, the City, and the County. The partnership began when a TASK volunteer approached D&R Greenway about the availability of the land, a former rail spur. D&R Greenway Vice-President Jay Watson assembled the partners and negotiated the acquisition of the land.

“Capital City Farm is a neighborhood enhancement and a direct benefit to our residents and local social service agencies,” said Mercer County Executive Brian M. Hughes. “The County was thrilled to be able to assist the City of Trenton, D&R Greenway and our other partners in this meaningful project.”

In addition to providing fresh produce to residents and social service agencies, the farm will offer education and employment opportunities and job training. The 2.3-acre site underwent remediation during the spring and summer of 2015, and a pollinator meadow was seeded. Just a few months after planting, the meadow attracted migrating butterflies and other native pollinators to feed and rest. Further development throughout the fall and winter included the creation of a small demonstration garden, installation of electric and water connections, construction of a 100-ft greenhouse and installation of a 1,500-gallon rain barrel to repurpose runoff from the neighboring Soup Kitchen’s roof. Local artists painted a bright mural on the site’s storage shed, and 500 cubic yards of topsoil were imported for the 2016 growing season.

During the fall of 2015, produce from the small demonstration garden was donated to six households in East Trenton. In 2016, the farm will produce 9,000 pounds of produce or more to be distributed affordably to Trenton customers. Plans for produce distribution and community engagement for 2016 are underway.

Capital City Farm’s community engagement team, led by social impact design studio Designing the We, has completed street surveys to identify residents’ desires for the project and generate involvement. In December and January, the engagement team hosted two pop-up exhibits in East and Downtown Trenton, Undesign the Redline. The exhibit discussed Trenton history, the history of redlining and disinvestment, and the history of resistance and advocacy to restore communities of color. Visitors were encouraged to think about projects that could help restore the strength of Trenton’s communities, generating further interest in the farm.

“It’s clear that the people of Trenton want to see their neighborhoods thrive, and are eager to become involved in co-creating that future,” said Braden Crooks of Designing the We. “They have a story to tell about how things got here, and what they can imagine going forward. Armed with their input and participation, we believe the Capital City Farm can become a gathering point of this energy and knowledge: a key node in the larger ecosystem of social change in Trenton.”

“The Capital City Farm is about utilizing local resources and partnerships to provide a cleaner environment and healthier lifestyle for the community,” said Latoya Wilson, a Trenton resident who holds a Master of Public Affairs degree. “In both my professional and personal experiences, I have witnessed similar programs allowing low-income residents and youth to develop agricultural skills, while proving organic vegetables for those who typically lack access to these resources. What struck me about the importance of the Capital City Farm project is the goal to engage Trenton residents to maintain control of their own resources by cultivating a co-ownership model centered on building a local economy.”

The farm team planted street trees on the adjacent Escher Street and created a new walkway for foot and bicycle traffic from North Clinton Avenue to Escher Street. The walkway, the new fence, the shade trees, and the flowering meadow have been received with enthusiasm from passersby. Turning an unwelcoming, semi-abandoned landscape into one that invites participation and produces something of value for the community has received praise from city residents, business owners and the media.

“The farm transforms a sizable vacant and contaminated parcel of land into a clean, productive use that will contribute to our efforts to make East Trenton a more vibrant and healthier neighborhood,” said Diane Sterner of the East Trenton Collaborative, the organization that guided and supported the community engagement process, along with its member organizations and the Watson Institute.

Trenton Makes continues, in a new model, under the old sign.

D&R GREENWAY LAND TRUST IS IN ITS 27TH YEAR of preserving and protecting natural lands, farmlands and open spaces throughout central and southern New Jersey. Through continuous preservation and stewardship—caring for land and easements to ensure they remain protected and ecologically healthy in perpetuity—D&R Greenway nurtures a healthier and more diverse environment for people and wild species in seven counties. Accredited by the national Land Trust Accreditation Commission, D&R Greenway’s mission is to preserve and care for land and inspire a conservation ethic, now and for the future. Since its founding in 1989, D&R Greenway has permanently preserved more than 19,232 acres, an area 20 times the size of New York City’s Central Park, including 28 miles of trails open to the public.