On Wednesday, September 9, 2015 at approximately 11:55 am a 24 year old resident, within the Lawrenceville Avalon Run Apartment complex’ area of building 6, was the victim of an armed robbery/home invasion. 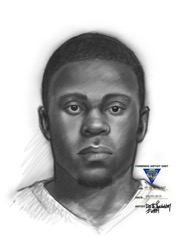 The suspect is described as a black male between 20-25 years old, 5’10”-6’00” tall with a thin but muscular build.  He had a medium-dark complexion with a small amount of facial hair on his chin. The suspect was last seen wearing a white V-neck T-shirt, unknown style pants and sneakers.  The suspect also had a tattoo on his upper right arm. The suspect was seen in the vicinity of the building 6 breezeway prior to the robbery.

Anyone with information regarding this investigation is asked to contact Det. Todd Caruso at 609-844-7127  or Sgt Joseph Lech IV 609 844 7107 or lawrencepolice@lawrencetwp.com.