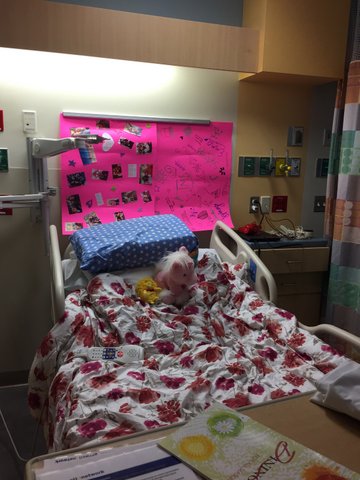 Last February, at 14-years-old, I was diagnosed with amplified musculoskeletal pain syndrome (AMPS) by a rheumatologist at Children’s Specialized Hospital (CSH), in New Brunswick. Though I was relieved to be diagnosed, I embarked on several weeks of painful outpatient therapy that didn’t help. I was in constant pain, especially in my legs. It felt like small pins constantly stabbing me. It hurt so badly that I was not even able to wear pants. I wasn’t very active either. I wanted to just sit constantly and not move. Only after I was admitted into CSH, for an intensive therapy program, did I slowly notice my pain decreasing. It took one month to be discharged, pain free, and get back to having a normal life.

AMPS affects 10-20% of children, mostly female, in the world, ages 10-16, and is an umbrella term for several pain disorders, such as chronic regional pain syndrome (CRPS), fibromyalgia, myofascial pain syndrome, reflex neurovascular dystrophy (RND), and reflex sympathetic dystrophy (RSD). When people with normally functioning pain responses get hurt, a message is sent through the nerve to the spinal cord which is then transferred up to the brain, and the brain recognizes this as pain. For people with AMPS, something different happens. Besides going to the brain, the pain signal goes to neurovascular nerves, which control blood flow through the blood vessels. This causes constriction of blood vessels and a reduction of blood flow and oxygen movement to muscles and bones, leading to an increase in waste products, like lactic acid. Though the exact cause of AMPS is unknown, injury, illness, and psychological stress are all triggers.

Though my family thinks I’ve had abnormal pain responses for a few years, it’s hard to distinguish between AMPS pain and pain due to injury. Pain escalated after I broke a bone in my foot and had to have surgery, in November 2015. Though my doctor fixed the bone, my life fell apart. Pain medicines didn’t work, my body became very sensitive to all touch (i.e. wearing pants, hugging people), and I began having chest pains and panic attacks. Nothing made sense. A cardiologist confirmed that my heart was fine and sent us to a rheumatologist. Part of me wondered if I was going crazy.

After being diagnosed with AMPS, I was told that I needed to do an outpatient therapy program that consisted of occupational, physical, and psychological therapies, three times a week for an hour at a time. The occupational therapy goal was to desensitize my skin, the physical therapy goal was to improve blood vessel flow, and psychological therapy was supposed to retrain my brain’s perception of pain. Therapies were done after a day at school but, after a month of not seeing improvement, I was recommended for the inpatient program at CSH.

Though it should have been a hard decision to miss the last month of 8th grade, it wasn’t. I was barely functioning and just wanted to feel better, but I WAS scared of what people thought. Though my friends and family were supportive, most people just didn’t “get it.” I looked fine so a lot of people thought it was all in my head. I honestly couldn’t blame them, as I had my doubts.

I checked into CSH’s pain program on May 11th and was put in a room with a girl who had pain due to Sickle Cell Anemia. The doctor said I was only able to see my parents on the weekends, so I wouldn’t be distracted from therapy, which was difficult at first until I started making friends, and it started to feel like home.

It was very difficult and I broke down in tears frequently in the first days. It was hard to go back every single day and do it again and again. Something that helped me tremendously was seeing girls in the program, whose pain was worse than mine, who were able to push through it. Our days consisted of waking up at 7:00 a.m., going to the pool for a half an hour, then going to either occupational therapy, physical therapy, psychological therapy, group therapy, or school work time. Each day, we finished about 5:30 p.m. for dinner.

The whole process was really difficult for me, but I couldn’t help but wonder how it affected my friends and family. My brother, Leo, said that he was sad not having me home, and my friend, Sydney Brooks, said that she wanted to cry when she found out I was being admitted into the hospital, but that she knew she had to be strong for me. She tried visiting me every weekend to make me feel like it was as normal as possible for me. The hospital also helped make life a bit more fun by having baking and movie nights and letting us play in the outside courtyard. They would also have special nights like when Broadway and TV star, Ally Stroker, came to sing for us and tell her story. Ms. Stroker had also spent time as a patient at CSH, when she was a kid.

My teachers and school counselor were also very supportive. I was given a 504 plan (a document that ensures accommodations at school) that stopped my grade point average before going into the hospital, so I could focus on getting better. My German class sent cards and my English teacher told me that my absence in her class was felt because I had always been a “source of positivity and leadership in our class,” which made me feel good. Though I was scared about what would happen next when I was first diagnosed or if it would even help me, I’m so glad I went into the hospital. I learned that I can handle anything. Hopefully AMPS won’t return for me but if it does, I know I can face it.

Community Contributor: Emma Jacobs is a 15-year old Freshman at Hopewell Valley Central High School. Emma has a younger brother (Leo) and also has both her mom and dad. She loves playing volleyball at CJVA in Flemington and enjoys hanging out with friends and family. In the future, she hopes to play volleyball in college and be involved in the medical field.